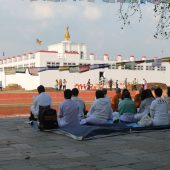 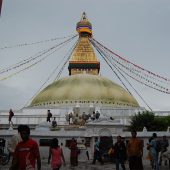 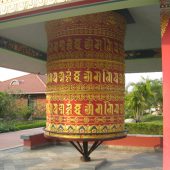 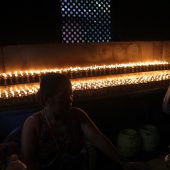 Buddhist Pilgrimage Tour is planned thinking of Buddhist people. The itinerary includes The most worth visiting Buddhist sites in Kathmandu, The Lumbini and Pokhara.
The Shakyamuni Buddha, Siddhartha Gautam was born to the south of Nepal Lumbini 523 BC. The Lumbini is the origin of Budhism.  There are many caves where the great masters of Buddhism were meditated. The Boudhanath and Swyambhunath Stupas are made off including the relics of Buddha which are the most sacred. Student, researchers who would like to investigate, research about Buddhism, it could be a best place. There are different Gumpas which represents different sect of Buddhism like Mahayana (the Great Vehicle), Therabada (Teachings of the Elders), Mountain Buddhism etc. Thinking of your dream come true, we are aware of providing the excellent services to make smooth and reasonable, we will organize the following.

Nepal is the most sacred pilgrimage place to the Buddhist and the Hindus from all round the world. Nepal is rich in its culture and tradition, historical places and pristine Himalayan peaks to the north.

We will be waiting at Nepal airport upon your arrival. Welcome you as per Buddhist culture and transfer to your hotel. Enjoy the welcome drink and at the same time your guide will brief the program. Take a free look around (If your time permits we will drive to Boudhanath to see the butter lamp lighting and make a round to the Stupa by Buddhist followers). Later in the evening we will organize a cultural Nepali dinner at Nepali restaurant. Return to Hotel and night rest at Hotel.

Boudhanath:
it is situated to the north of Kathmandu is a UNESCO World Heritage Site (1979). This is the holiest pilgrimage site to the Buddhist that they believe to entomb the remain of Buddha. The pilgrims walk around the Stupa to show their devotion to the GOD. The stupa was built in (590-604CE) by Lichhavi King Shiva Dev. It was damaged by 2015 earthquake and now it is renovated already.There are more than 50 Gumpas around the giant stupa.

Wake up early (5:30am) in the morning and drive to Swyambhunath Stupa. You will see the Buddhist people walking around the stupa (you could see people bowing their body and walking around). Explore the stupa and arund and later return to Hotel for breakfast. After refreshment, drive to Kopan Monastery (Tibetan Buddhism University). Explore around the Gumpa and you may talk to Lama and Nuns. Later you will proceed to another UNESCO World Heritage Site Pashupatinath. Evening back to Hotel and night rest.

Transfer: By private car/ van as per group size
Accommodation: Hotel in the city center
Taken care by: City tour guide.
Activities: Sightseeing around the city.

Swyambhunath:
The 'self-sprung' Stupa probably the most sacred among Buddhist pilgrimage sites in Kathmandu. For Tibetans and followers of Tibetan Buddhism, it is second only to Boudha. It is located to the west of Kathmnadu at a 70m hillock. THe stupa is situated over the vast round dome. Buddha eyes (2 ever seeing eyes) wisely looking out over the peaceful valley

Kopan Gumpa (Monastery):
Kopan Monastery is a Tibetan Buddhist monastery is situated to the north of Kathmnadu. It is a member of the Foundation for the Preservation of the Mahayana Tradition (FPMT), an international network of Gelugpa dharma centers, and once served as its headquarters. It was established in 1969 AD. The Monastery is famous for Buddhist teaching to the foreigners.

Pashupatinath:
A Multi story Pagoda temple Pashupatinath is situated to the north east of Kathmandu at the bank of Bagmati river. Pashupatinath is the supreme GOD of the Hindus, Shiva temple. The history of Pashupatinath is dates back to 400BC. The major festivals are Maha Shiva Ratri, Haritalika, Bala Chaturdasi etc.

Breakfast will be serving at Hotel. After breakfast check out from Hotel with luggage and drive to Bhaktapur. Explore Bhaktapur Durbar Square and after lunch, drive to domestic airport and fly to Pokhara. Transfer to hotel and check in. Later in the evening walk around lake side. Dinner will be near by lake side in a restaurant. Later walk back to hotel and night rest.

Bhaktapur:
Bhaktapur Durbar Square is the most worth visiting tourist spot (UNESCO World Heritage site) in Kathmandu valley. It is also popular as a open museum with live culture. Itr is an ancient city and is renowned for its elegant art, fabulous culture, colorful festivals, traditional dances and indigenous lifestyle.

Pokhara:
Pokhara city, gateway to Annapurna is also known as a naturalist paradise. Pokhara offers a varieties of adventure like Boating, Pafting, Paragliding, Hiking, cycling etc. Hike to Peace Pagoda or Sarangkot are amazing with the brilliant view to Annapurna series and Pokhara downtown.

Transfer: By private car/ van as per group size
Accommodation: Hotel in the lake side
Taken care by: City tour guide.
Activities: Drive to sight seeing.

World Peace Pagoda:
World Peace Pagoda is a Buddhist pagoda-style monument on Anadu Hill west of Pokhar city. It was build by Nipponzan Myohoji sonin at an altitude of 1100m. It is one of the tourist attraction with a panoramic view of the Annapurna range, Pokhara city and Fewa Lake.

Take a breakfast at Hotel in Pokhara and drop to domestic airport. Fly to Lumbini (Bhairahawa) and transfer to hotel in lumbini. Check in to Hotel and later after refreshment take a tour around Sacred Garden (Chinese temple, Vietnam temple, Myanmar stupa, Thailand temple and many more). Later back to Hotel and night rest.

Wake up early in the morning and walk to Maya Devi temple (birth place of Lord Buddha) and greet to Shakya Muni Buddha and his mother Mayadevi. After visit the sacred garden, back to hotel for breakfast. Later explore visit Tilaurakot (the palace of Siddhartha from where he had a great escape). Later in the afternoon transfer to domestic airport and fly back to Kathmandu. Transfer to hotel and night rest the Hotel.

Fly Back To Home:

After breakfast, take a free time around downtown for shopping souvenir and or etc. After a wonderful Nepal tour, we will transfer to airport for the final departure. We wish you all smooth return to home with Khada, in a Buddhis way and say you good bye. Sweet gome.

Guide is the major part to make your holiday smooth and meaningful. We will provide an English speaking and well-experienced city tour guide. The guide keeps good knowledge about Buddhism, culture, and history of Nepal. If you require a language speaking guide, you can send us an email prior to your arrival.

Accommodations:
There are all class hotel are available in Nepal. Please do let us know as per your budget and expectations. We will give you some of the best recommendation and once you will agree, we will book them to your accommodation.

Meal:
Nepal offers wide variety of food (vegetarian, Nepali, Chinese or continental) choices. We will organize food as per your request.

Vehicle:
We will arrange a good condition vehicle fully air-conditioned and a well-experienced driver.

Clothing:
Nepal has four seasons. Please write to us for clothing recommendations before you go to Nepal.

Payments:
We will require 25% of advance payment to confirm the booking. The rest of the money you can pay after you arrive in Nepal.

Booking:
We require an Email including (arrival date, passport name and not of person) details. We will book all services and send you the confirmation email. With 25% of advance payment the booking will be confirmed.